GSCW obtained a new recreation area in 1937, which consisted of seventy-five acres near Moran Springs, on the east side of the Oconee River.  Lake Laurel soon became the student’s designation for Recreation Park, and the name stuck. When purchased by the college, there was neither a lake or any laurels on the property. But Guy Wells and Hubert Dewberry, who was then assistant bursar, discovered on the land a little creek (called Champion Creek) that was fed year-round by the copious waters of Moran Springs. Convict labor was obtained to dam up the creek, and a fifteen-acre lake came into being. Meanwhile, Guy Wells saw to the planting of mountain laurel, rhododendron, and Scottish broom from cuttings obtained in the North Georgia mountains. Predictions that these highland plants would not grow on Middle Georgia hills proved partly false— only the laurels did not survive, but they gave the place their name. A lodge alongside the lake was built by prisoners out of used lumber. Everything had been done at minimal cost— the land had been acquired cheaply and developed with state supplied prison labor.

On July 4, 1938, Lake Laurel Recreation Park had its opening. The lodge and acreage has become home for many academic classes and programs. 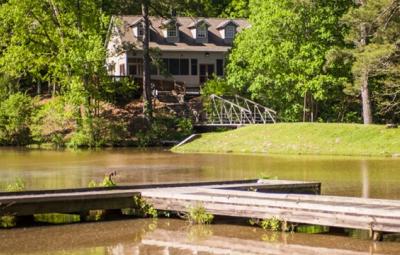